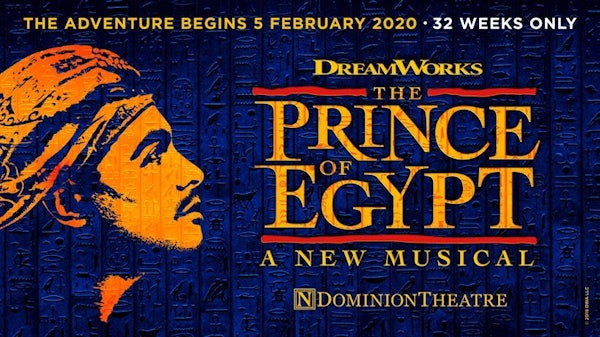 The Prince of Egypt is one of the greatest stories ever told. A mother’s love leads one woman to send her child into the unknown, and another woman to hide the truth about where he came from. The saga of Moses and his brother Rames who would become Pharaoh. The tale of a brother exiled, finally returning to his home and fighting to free his people from the bonds of slavery and lead them to the Promised Land. This is a story that will change everything, forever.

The Prince of Egypt was a feature-length animated musical film released by DreamWorks Animation in 1998. The film, which recently celebrated its 20th anniversary was a box office success, becoming the highest grossing non-Disney animated film of the time. The film features songs from Stephen Schwartz, a score from Hans Zimmer and the film’s celebrated screenplay was written by Phillip LaZebnik. The Prince of Egypt featured a star-studded array of vocal talent including Val Kilmer (who voiced Moses and God), Ralph Fiennes, Michelle Pfeiffer, Sandra Bullock, Jeff Goldblum, Danny Glover, Patrick Stewart, Helen Mirren, Steve Martin, and Martin Short.
The musical tells the same story of Moses and his brother Rames that is followed in the film. There are several songs in the musical that fans will remember from the film, including the runaway hit ‘When You Believe’, the show also features songs that were newly composed for the stage version of the musical. Casting for the London run of The Prince of Egypt has yet to be announced, but check back for updates in due course.

By far and away the most popular song from The Prince of Egypt soundtrack was ‘When You Believe’. The pop duet between divas Whitney Houston and Mariah Carey went on to be a global hit and even won an Academy Award®-winning for Best Original Song in 1999. The original film version of The Prince of Egypt was widely applauded for its soundtrack. Music and lyrics were written by the legendary Stephen Schwartz writer of hit musicals ?Pippin, Wicked, and Godspell. The soundtrack included favourites such as ‘Deliver Us’, ‘All I Ever Wanted’ and ‘Through Heaven’s Eyes’, which all feature in the stage musical alongside ‘ plus 10 songs that have been composed especially for the stage version of the musical.