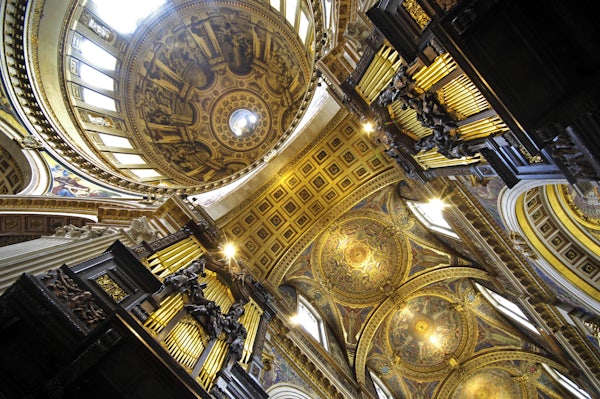 Situated on the north bank of the River Thames St Paul`s distinctive dome was designed by Sir Christopher Wren in 1710 after the great fire of 1666 destroyed the original church. The cathedral consists of the Crypt, Ambulatory and Whispering Gallery.

A Cathedral dedicated to St Paul has overlooked the City of London since 604AD, a constant reminder to this great commercial centre of the importance of the spiritual side of life. The current Cathedral – the fourth to occupy this site – was designed by the court architect Sir Christopher Wren and built between 1675 and 1710 after its predecessor was destroyed in the Great Fire of London.

Its architectural and artistic importance reflect the determination of the five monarchs who oversaw its building that London’s leading church should be as beautiful and imposing as their private palaces. As the Cathedral of the capital city, St Paul’s is the spiritual focus for the Nation. This is where people and events of overwhelming importance to the country have been celebrated, mourned and commemorated since the first Service took place in 1697.

Since then important services have included the funerals of Lord Nelson, the Duke of Wellington and Sir Winston Churchill; Jubilee celebrations for Queen Victoria, King George V; peace services marking the end of the First and Second World Wars; the launch of the Festival of Britain; the Service of Remembrance and Commemoration for the 11th September 2001: the 80th and 100th birthdays of Queen Elizabeth, the Queen Mother; the wedding of Charles, Prince of Wales, to Lady Diana Spencer and, most recently, the Thanksgiving for the Golden Jubilee of Her Majesty the Queen. Over the centuries, St Paul’s has changed to reflect shifting tastes and attitudes. Decoration has been added and removed, services have been updated, different areas have been put to new uses.

Today, the history of the nation is written in the carved stone of its pillars and arches and is celebrated in its works of art and monuments. In the crypt are effigies and fragments of stone that pre-date the Cathedral, relics of a medieval world. From Wren’s original vision, Jean Tijou’s beautiful wrought iron gates of 1700 still separate the quire from the ambulatory; children still test the acoustics in the Whispering Gallery; and the 1695 organ which Mendelssohn once played is still in use. The magnificent mosaics are the result of Queen Victoria’s mid-19th century complaint that the interior was “most dreary, dingy and undevotional.” The American Memorial Chapel stands behind the High Altar in an area that was bomb-damaged during the Second World War – a gesture of gratitude to the American dead of the Second World War from the people of Britain. An altar has now been installed on a dais in the heart of the Cathedral, bringing services closer to those who attend them.

Throughout, St Paul’s has remained a busy, working church where millions have come to worship and find peace. It is a heritage site of international importance which attracts thousands of people each year, a symbol of the City and Nation it serves and, above all, a lasting monument to the glory of God. St Paul’s Cathedral is the cathedral of the Diocese of London. The Diocese is made up of five episcopal areas: Willesden, Edmonton, Stepney, London and Kensington. Four of these have an Area Bishop, to whom the Bishop of London, The Right Reverend and Right Honourable Richard Chartres, delegates certain responsibilities. The Bishops are assisted by Archdeacons. Archdeaconries are further divided into deaneries which are groups of parishes. The Bishop of Fulham is the Suffragan Bishop for the whole Diocese. In 2004 the Diocese celebrates its 1400th anniversary. The administrative centre is London Diocesan House.

ATTENTION: The Cathedral is closed to visitors on Sundays as services are held throughout that day. Worshippers are welcome to attend the services.

The cathedral regularly changes it’s opening hours depending on services held so guests are requested to check ahead of their visit.