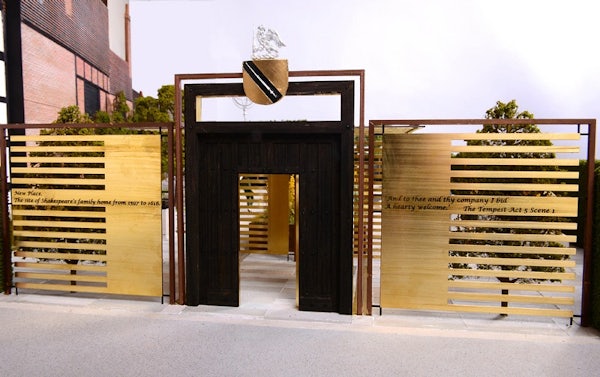 Walk in Shakespeare’s footsteps and meet the man behind the works in a fascinating new exhibition. Discover beautiful gardens and specially-commissioned artworks.
Shakespeare’s New Place was his family home from 1597 until he died in the house in 1616. The house was demolished in 1759, a registered garden has been designed to commemorate the importance of the site and allow visitors to make their own personal connection with Shakespeare.
When Shakespeare bought New Place he was an established playwright and it is believed that he wrote his later plays there, including The Tempest.
Follow in Shakespeare’s footsteps through a new entrance on the site of the original gatehouse and enjoy a contemporary landscape that reveals the footprint of the Shakespeare family home. The re-imagined site gives an impression of the scale of New Place and relationship to the surrounding buildings; such as the neighbouring King Edward VI School and Guild Chapel that were once attended by a young Shakespeare.
Commissioned artworks and displays throughout the site evoke a sense of family life and hint at Shakespeare’s major works that were written during the 19 years he owned New Place.
The sunken Knot Garden has been restored in keeping with the original design by Ernest Law. Elements of the Great Garden, the largest surviving part of Shakespeare’s estate, will be conserved and further developed over time.