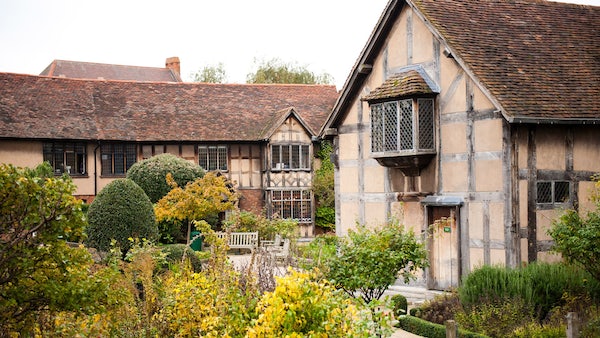 Possibly the most famous and most visited literary landmark in Britain. This is the house where it is thought that Shakespeare was born and spent his formative years. The house originally belonged to William Shakespeare’s father John, who became a successful Stratford businessman. John & Mary Shakespeare moved from nearby Snitterfield to Stratford in 1529, shortly after getting married. It is known from Stratford records that the Shakespeare family were residing in Henley street by 1552 and that William Shakespeare was born in 1564. It is assumed from this collection of dates that this building in Henley Street was William Shakespeare’s Birthplace. The Birthplace remained in the hands of Shakespeare’s descendants until the 19th century, after which it had a somewhat chequered past. The Shakespeare Birthday Committee obtained the Henley Street house in 1847, with the financial and moral support of the public. An extensive project of restoration then took place to restore the house to it’s former glory. The Birthplace was originally made of local materials; with oak timber from the nearby Arden Forest and blue stone from Wilmcote. Much of the original stone, oak beams and fireplaces are still in place and care has been taken to furnish the house with contemporary Elizabethan furniture. The house is approached via the Visitors’ Centre which holds a comprehensive exhibition about Shakespeare’s life. The Birthplace is then reached via the charming and meticulously tended gardens, which contains many trees, flowers and herbs mentioned in Shakespeare’s works.