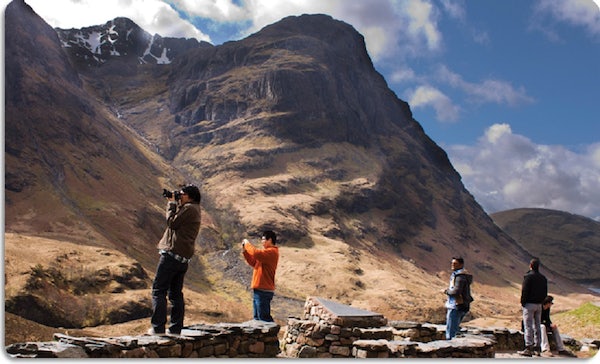 Relax and enjoy Scotland’s splendour with Rabbie’s Tours. The Scottish Highlands and Islands are Europe’s last great wilderness so why not escape with Rabbie’s personalised small group tours. Small groups with a maximum of 16 passengers mean you can discover the real Scotland, get off the beaten track and onto the back roads that other tours cannot manage.Your educated driver/guide is there for you, dedicated to making your visit to Scotland memorable and enjoyable whatever your requests.

Depart Glasgowand travel north towards the Highlands along the “bonnie, bonnie” banks of Loch Lomond. This is Scotland’s largest loch and it takes its name from the mountain Ben Lomond on the eastern shore.
Crossing the ancient natural fault line that runs across Scotland you travel into the majestic Highlands where the scenery changes quickly and dramatically – the flat fertile plains of the Lowlands give way to shimmering lochs, rugged mountain tops and forest-filled glens. It’s easy to forget that this was once thought of as a dangerous frontier fought over by the fiercely territorial Highland clans such as the MacGregors, made famous by the Highland folk hero, Rob Roy MacGregor.
Travelling north through Breadalbane (meaning the ‘High Country of Scotland’), you climb towards the wild desolation of Rannoch Moor. At an altitude of over 1000ft, covered by heather and peat-bogs and dotted with dozens of lochs, it’s a unique landscape. This contrasts with the spectacular mountain scenery as you pass the majestic peak of Buachaille Etive Mor (meaning ‘the great shepherd of Etive’) and down into Scotland’s most famous valley, Glencoe.
Stunningly beautiful, with its dramatic cliff faces and steep slopes, Glencoe is infamous as the site of the Glencoe massacre in 1692. Following orders from King William, Scottish soldiers, under the leadership of Captain Robert Campbell, slaughtered 38 men, women and children of the Macdonald clan. This was especially shocking as the soldiers had been living with the people of Glencoe for 2 weeks and killed them in their own homes. Noone was ever punished for this crime, as the King himself had signed the order, but because it was murder under trust, the Highlands would never be the same again.
Beyond Glencoe you will enter the Great Glen, a deep glacial valley which follows a geological fault line. Passing through the town of Fort William you drive under Britain’s highest mountain, Ben Nevis before arriving at Fort Augustus on the southern shore of Loch Ness.
At 23 miles long and over 700ft deep it’s the largest loch by volume in Scotland and contains more water than every lake in England and Wales combined! Of course, the loch is best known for the legendary sightings of the Loch Ness Monster (“Nessie”). Fort Augustus is a pretty little town in its own right, the Caledonian Canal which links the lochs of the Great Glen dominates the town and makes a great place to relax and watch the boats sail by. You will stop here for lunch before travelling north the full length of the loch with the opportunity to take a 5 Star Jacobite boat cruise on the loch and view the ancient stronghold of Urquhart Castle.
Once one of Scotland’s largest castles, Urquhart’s remains include a tower house that commands splendid views of the famous loch and Great Glen. Urquhart witnessed considerable conflict throughout its 500 years as a medieval fortress and its history from the 13th to 17th centuries was particularly bloody. Following Edward I’s invasion, it fell into English hands and was then reclaimed and lost again. In the 14th century, it figured prominently in the Scots’ struggle for independence and came under the control of Robert the Bruce after he became King of Scts.
From Loch Ness you continue north through Inverness before travelling south through the mountains of the Cairngorms National Park. Your route takes you over the Drumochter Pass (1500ft above sea level) and past 13th century Blair Castle, ancestral home of the Duke of Atholl. Your next stop is the Highland resort town of Pitlochry, built on Victorian tourism and nestled amongst the mountains of Highland Perthshire.

Following a short break here you return to Glasgow at approximately 19.45.

Departure Point till 31/03/20 – Outside Parish Hall, 266 George Street (next to the City Chambers, between North Frederick Street and John Street), Glasgow.
Departure Point from 01/04/20-Buchanan Bus Station, Killermaont Street, G2 3NW  (Tours will depart from a stance between stances 23-32)

Inclusions – Transportation by top of the range minicoaches for a more personal service. Forced air ventilation as standard.
Services of a professional Rabbie’s driver/guide.
Exclusions – Lunch / refreshments and any entrances / cruises.

DEPARTURES:
Tour departs DAILY at 08.30 hours and returns back to GLASGOW at 19.00 hours approx**.