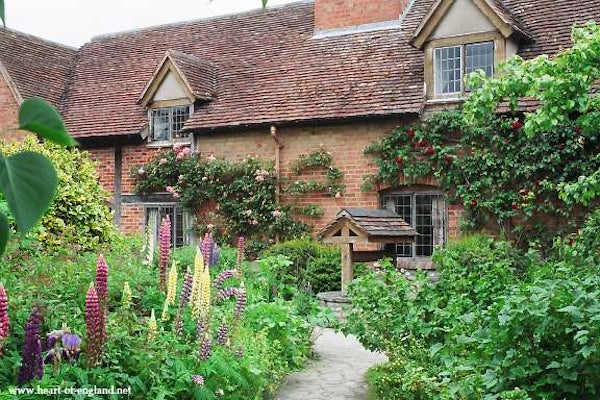 Mary Arden’s House was the name given, until recently, to a timber-framed farmhouse in Wilmcote, a hamlet in the parish of Aston Cantlow. It was so called on the strength of a tradition (which cannot, however, be traced back beyond the 1790s) that it was owned by Robert Arden, and may therefore have been the home of his daughter, Mary, until her marriage to John Shakespeare. In 1891, when the Shakespeare Birthplace Trust was placed on a legal footing by private Act of Parliament, it was charged with the duty of purchasing ‘as and when the opportunity shall arise the house at Wilmcote known as the house of Mary Arden his [Shakespeare’s] mother’. This was achieved in 1930, when the property next came up for sale, and, after extensive restoration (including the removal of the early-nineteenth century stucco) was opened to the public. Recently, however, the true location of the Arden homestead has been identified as the neighbouring Glebe Farm, and the name Mary Arden’s House transferred to it. The former Mary Arden’s House, has been re-named Palmer’s, after Adam Palmer, now identified as its owner in the 1570s and ’80s.
Robert Arden, who died in 1556, was a well-to-do husbandman with eight daughters. In 1550, when he made arrangements for the future division of his estates, four were still unmarried. Mary was one of these and she was still single on Robert’s death six years later. By that time, her father had married again, taking as his second wife a widow, Agnes Hill, who had four young children of her own.

Palmer’s with the exception of the lean-to structure at the rear, dates from the sixteenth century. The south face, with extensive use of decorative timber, must originally, as now, have been the ‘front’. The biggest difference between the building today and the sixteenth-century farmhouse is at the eastern end. This bay, with elaborate herring-bone decoration in its gable, has recently been dendrochronologically dated to 1569. It was originally a cross wing at least two bays deep, built onto a hall of earlier date. Then, in 1580, the owner, Adam Palmer had the old hall demolished and the central section of the present house built in its place. This comprised a new two-bay hall, originally open to the roof. A further bay to the west, with cross passage and kitchen, was added the following year. By the eighteenth century, however, the bay (or bays) at the rear of the cross wing had been demolished, and the present lean-to added. At the rear of the property is a complex of farm buildings, including, in one range, a dovecote, an open-fronted cowshed and small barn with cider press, together with a stable and large barn now housing a display of farming equipment. These form part of the Shakespeare Countryside Museum which is continued in another complex of farm buildings to the west. This, formerly known as Glebe Farm, has now been identified as the Ardens’ family residence, a copyhold property, held of the lord of the manor, which Robert Arden bequeathed to his wife, Agnes (Mary’s step-mother) and which was recorded as late in her tenure in a 1587 survey. The main part of the farmhouse itself, originally built with an open hall in its central bay, has been dendochronogically dated to 1514. A wing was added to the west end soon afterwards, and this was extended northwards early in the eighteenth century. The Ardens’ copyhold title passed from Agnes Arden to her son-in-law, John Fullwood, and then descended in his family until 1662. It was then sold off by the lord of the manor and in 1738 later owners disposed of it to augment the living of the neighbouring parish of Billesley, hence its traditional name, Glebe Farm. A few years later, more lands and buildings were added to this glebe which recent research has further established represent the freehold premises in Wilmcote which had come to John Shakespeare on his marriage to Mary Arden. These John had then mortgaged to his brother-in-law, Edmund Lambert, whose son John kept them in his possession despite legal cases brought against him by the Shakespeares. The buildings of Glebe Farm were bought by the Shakespeare Birthplace Trust in 1968, but it was not until 1978, on the death of the sitting tenant that occupancy was obtained. Palmer’s was bequeathed, in 1584, by Adam Palmer to his son Edmund, and has a well documented history thereafter. Its mistaken attribution as the home of the Arden family can be traced back no earlier than 1794, when it featured in correspondence between Samuel Ireland and John Jordan. Jordan also executed the earliest known drawings of the house, though none were published during his lifetime. It was another eighty years or so before uncritical attributions of the property as Mary Arden’s House became a regular feature of tourist guides.