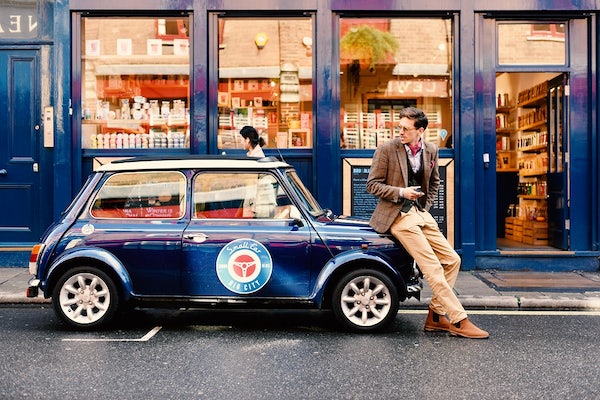 See London with your own private driver who shows you around the city in a classic Mini Cooper.

HARRY POTTER FILM LOCATIONS (3 hrs)
See the local London sights where the most successful British film franchise of all time was filmed. Be chauffeur driven round each film location in a restored classic Mini Cooper with your very own passionate local guide to bring the story to life.

Calling all Muggles and Wizards! Come and discover a wonderful world of magic. Squeeze between two busses over Lambeth Bridge, just as Harry did, but rather than travelling in the Night Bus you will be in a restored classic Mini Cooper. See the inspiration behind Diagon Alley and where the Death Eaters threatened from above. You will see film locations featured in all of the films from the Philosopher’s Stone to the Deathly Hallows.

Whether you wish to be Harry, Ron or Hermione, retrace the stars’ footsteps and recreate the famous scenes for yourself. You will finish up at Platform 9 ¾ just in time to catch the Hogwarts Express back home.

***These are classic Mini Coopers and are smaller than regular cars, even the modern Mini’s, although once inside they are deceptively large. Generally speaking anyone under 6ft will be fine. Anyone over 6ft can ask their driver to stop as often as they like to stretch their legs.***

CANCELLATION POLICY: Tours may be cancelled free of charge up to 3 DAYS prior to the date of the tour. For bookings including 3 or more cars 10 DAYS cancellation applies. Cancellations received less that the required days notice will have full charges.