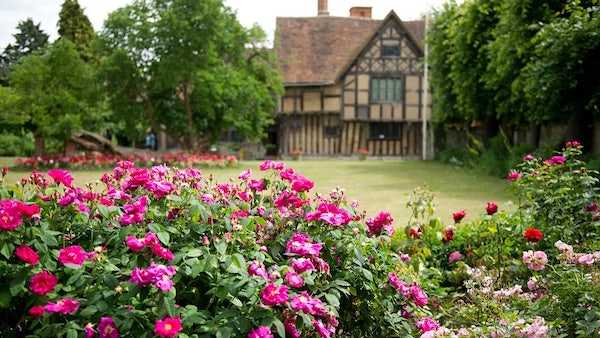 Explore the beautifully furnished Jacobean home of Shakespeare’s daughter Susanna and her husband, Dr John Hall. Wander into the tranquil walled garden and discover the fragrant medicinal herbs, as Dr Hall would have used in his remedies.
The main part of this fine timbered property was built in 1613. For most of its history, it has been the home of prosperous, often professional people and in the mid-19th century it served as a small school. The Shakespeare Birthplace Trust purchased Hall’s Croft in 1949 and, after substantial repairs and alterations, opened it to the public in 1951.
John Hall was a physician of some renown and his case notes, published after his death in 1657, were a popular textbook for other doctors for many years. Dr Hall was a compassionate and diligent physician, treating both rich and poor, Catholic and Protestant patients alike. While some physicians practised astronomy or blood-letting, John Hall’s preference was for treatments made from plants, herbs, animal extracts, gemstones and rocks.