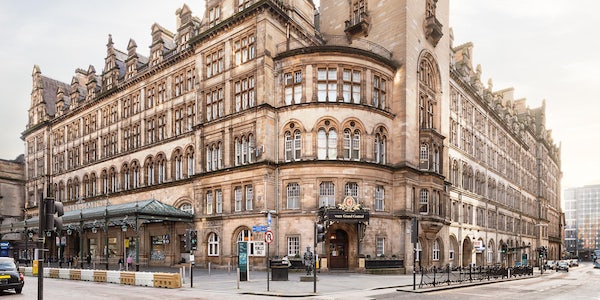 ​Designed by celebrated architect, Robert Rowand Anderson, The Grand Central Hotel was originally built in 1883 for Caledonian Railways, and was one of the great British railway hotels opened throughout the 19th-century alongside the rapid development of the railway network.

The hotel was later extended further and soon became one of the most prestigious hotels in Glasgow, welcoming many famous guests through its doors, including Frank Sinatra, Winston Churchill, JFK and the Queen. Today, the hotel is still very much an iconic and historic landmark in the Glasgow skyline, where modern interiors complement the building’s original features and heritage to create a luxury city retreat.

Completely refurbished in 2009, all the 230 stylish bedrooms are beautifully decorated and well equipped with all the modern appliances, a plasma TV, premium bedding, a laptop safe and an iron. Free superfast WI-FI is available throughout the hotel.

The magnificent Tempus Restaurant & Bar serves seasonal local produce, a varied choice of cocktails and a selection of wine, beer and champagne. Come discover The Champagne Bar with its domed ceiling and marble floor, as well as The Deli Central who offers light snacks in a relaxed environment.

The Grand Central Hotel has been received a Silver Green Tourism award, which demonstrates that the management of the hotel takes this commitment seriously and are working towards the Green Tourism Business Scheme to become as sustainable and efficient as possible.