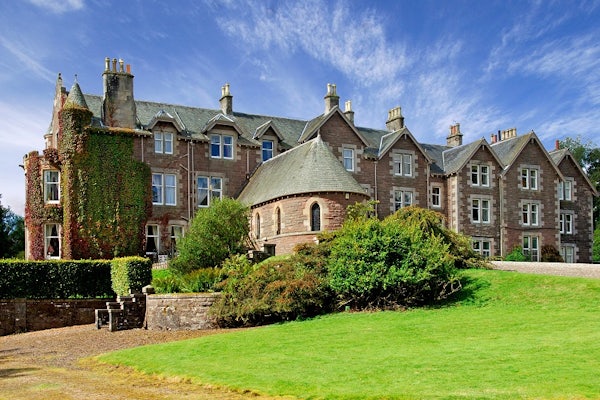 ​Situated in beautiful countryside, just three miles from Dunblane, Cromlix is set in 34 acres of secluded woodlands and garden grounds, with its own chapel and house loch. This elegant Victorian Perthshire mansion has recently become a luxury 15-bedroom and Gate Lodge, five-star destination.

Each of the 10 bedrooms, 5 suites and one-bedroom gate lodge has their own individual design and character. All the bedrooms are subtly decorated with splendid views over the manicured grounds or tennis courts and surrounding countryside. The suites, most of which feature hand-painted freestanding baths in gold, silver and copper, have all been named by the owner, Andy Murray, in recognition of famous Scots: poet Robert Burns; Lady Elizabeth Bowes-Lyon who became Her Majesty Queen Elizabeth The Queen Mother, Robert the Bruce, medieval King of Scotland, Eden, the family who previously owned Cromlix, Sir Alex Ferguson, former football manager and player and Sir Chris Hoy, Olympic cyclist.

The hotel boasts a Chez Roux restaurant, offering reasonable priced menus that focus on using seasonal locally sourced produce wherever possible. Dining at Cromlix is a culinary experience that need not be confined to the dining room. Chez Roux restaurant, overseen by the legendary French chef Albert Roux and run by award-winning executive head chef Darin Campbell, is housed in the glass-walled conservatory overlooking the grounds and offers diners a ringside view of the chefs at work in the extensive open kitchen.

With Andy Murray as Cromlix’s owner, a tennis court and tennis coaching were a must-have!
Guests at this five-star hotel can double up a fantastic stay with professional coaching lessons or simply polish up their game on the full-size court in the hotel’s grounds.