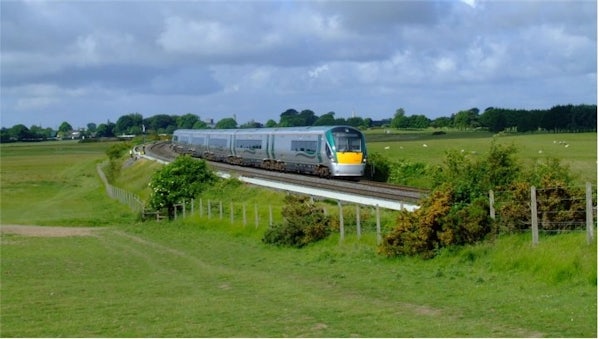 Trains are the most spacious and comfortable mode of travel in Ireland, you can sit back, relax and enjoy the ever changing scenery unfold. With the space to move around, your journey will no longer be a necessary hassle but instead a thoroughly enjoyable part of your holiday.

Railtours Ireland – First Class, provides the opportunity to travel from Dublin to the absolute edge of Europe, offering a combination of stunning scenery and ancient heritage. With Railtours Ireland – First Class you can enjoy scenic highlights along the Wild Atlantic Way such as the Ring of Kerry, the Cliffs of Moher, Connemara and the Aran Islands where the rugged landscape has been shaped over centuries by the Atlantic Ocean.

Check in for 07:00 departure from Dublin Heuston Station, opened in 1844 as the headquarters of the Great Southern & Western Railway and is now the official principal station of Iarnród Éireann, Ireland’s national railway company.
As your train departs, you travel in a south westerly direction, through Dublin’s western suburbs and then through the lush, fertile countryside of Co. Kildare.
Your journey takes you through the Curragh which is famous for its racecourse, home of the Irish Derby, and there are many stud farms in the vicinity. One of the train stops is Thurles, where the Gaelic Athletic Association (GAA) was founded in 1884. The GAA is the sporting body responsible for promoting Ireland’s National sports – Gaelic football and hurling. You change trains at Limerick Junction for the Limerick bound train. You don’t need to worry about this change as you will be fully escorted from Dublin to Limerick Station.
Arrive into Limerick where you will join our Railtours Ireland tour coach. Limerick has a population of about 90,000 and its city charter was granted in 1197 AD, making it older than London! As you cross the river Shannon – Ireland’s longest river – you will see views of King John’s Castle to the right. The castle was completed in 1200 and marks the origins of the city. Limerick’s most famous author, Frank Mc Court, grew up here and the city was the setting for his book, ‘Angela’s Ashes’. Limerick is also the birthplace of celebrated BBC radio DJ, Terry Wogan and Hollywood star, Richard Harris. You will pass the GAA grounds of Páirc na nGael –the home ground of County Limerick’s Hurling and Gaelic Football teams. Limerick is also the home of Irish Rugby and you will pass Thomond Park, the Rugby stadium. After a brief city tour you travel onto Bunratty Castle and Folk Park. The castle was completed in 1425 and, after many years of neglect, has been restored to its former glory. There is also a folk park here which you will have time to explore.

After the visit to Bunratty Castle and Folk park you make our way to Co. Clare. There is a lunch stop at O’ Connor’s Pub in Doolin before arriving at the Cliffs of Moher, among the highest sea cliffs in Europe. There is plenty of time to visit Ireland’s second most popular tourist attraction and your host will advise you of the departure time.
From here you take the coast road for much of the way to Galway, with time for photos along the Burren. This is a national park and the word ‘Burren’ comes from the Irish Language, meaning ‘rocky place’. It is a unique lunar landscape of limestone which was described in 1649 by one of Oliver Cromwell’s men as: “No tree to hang a man, no water deep enough to drown him and no soil deep enough to bury him”. Today the Burren is noted for its diverse flora with few parallels elsewhere in Ireland or, indeed, Europe. You continue along the coast road to Black Head, passing the quaint coastal villages of Ballyvaughan and Kinvara before joining the main road to Galway.
Some free time in Galway to explore the streets around Eyre Square or grab a bite to eat.
Depart from Galway by train and return to Dublin by a different route, via Athenry, Tullamore and Athlone, where you cross the mighty river Shannon once more.
*Visitor Attraction Admissions included: Bunratty Castle and Folk Park & The Cliffs of Moher Visitor Experience

CANCELLATION POLICY: 24 hours prior.
REMARK: All refunds are subject of 10% administration charge.