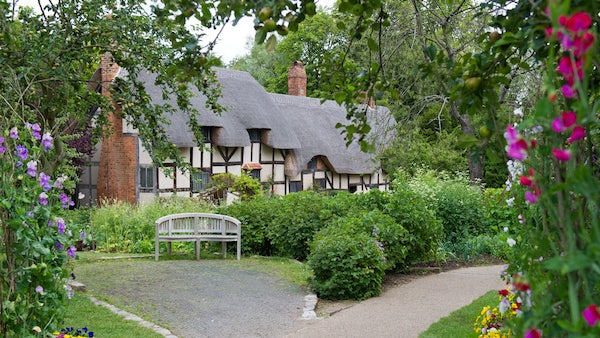 Anne Hathaway’s Cottage was the home of Shakespeare’s wife before they married in 1582. Besides its romantic associations, as the place where the teenage Shakespeare courted his future wife, the Hathaway home has also come to be regarded as the quintessential English country cottage. The thatched farmhouse continued to be inhabited by the Hathaway family and its descendants until the late 19th century. The site also includes a country garden, beautifully maintained and cared for by the Shakespeare Birthplace Trust’s gardeners, and The Shakespeare Tree Garden. This garden, created in 1988 and planted with most of the trees mentioned in Shakespeare’s plays, is also home to a new series of sculptures by young artists. Five of the ten sculptures planned are already in position. These sculptures are part of an on-going project, sponsored by the Newington-Cropsey Foundation, to commission art students from both the USA and Great Britain to create works inspired by Shakespearian themes. In 2001 a labyrinth maze was added to this spectacular garden.