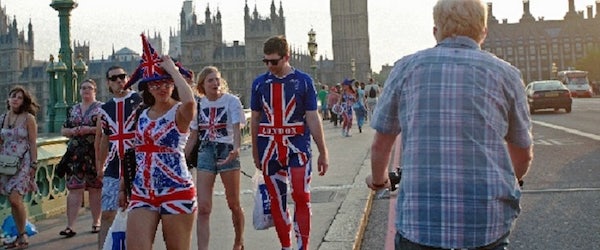 The London Bicycle Tour Company is London’s original bike tour, operating since 1991. The tours are safe, suitable for all standards, and offer an exciting way to discover the best sights of London.

♥Love London is a relaxed tour through the West End exploring some of the city’s most theatrical, artistic and culturally significant sights. On the way you’ll pass along handsome tree-lined streets and through some of the city’s most charming parks.
The journey begins at Gabriel’s Wharf and throws you straight into the quaint 1830s red-brick lined streets of Waterloo as you make your way towards The Cut. First stop is the Old Vic Theatre, one of London’s oldest and most loved theatres.
Across the road – Lower Marsh, a market street that’s a favourite of filmmakers and full of listed buildings housing lunchtime cheap eats and hip cafés. Turning right, you’ll explore a hidden underground tunnel, (sometimes known as Banksy Tunnel) a unique area filled with ever-changing street art.
Next stop is Archbishop’s Park, a secluded green area of tranquility that backs onto Lambeth Palace, the home of the Archbishop of Canterbury.
Crossing the river, you are transported back in time as you arrive at the courtyard of Westminster Abbey School, which offers a privileged view of Westminster Abbey and some of its hidden quarters.
From there it’s a short ride to Horse Guard’s Parade, a historic sporting ground where Henry VIII once hosted jousting tournaments, followed by a pedal through Hyde Park, Henry’s private hunting ground, before Buckingham Palace was built.
Up next is Mayfair, an area associated with luxury shops, galleries and exclusive clubs.
Passing along Carnaby Street, still known today as the centre of 60s Swinging London, it’s then onto Soho, a favourite haunt of the mods and hippies of the same era, and the stomping ground of British bands like The Rolling Stones.
As the tour draws to a close, you’ll pass bustling Chinatown en-route to Covent Garden – London’s Theatreland. Finally, it’s back across Waterloo Bridge, before returning to where it all began, hungry for your next London adventure.

NOTE: The guide may speak more than one language on this tour.
Children under the age of 10 in your group please contact the office before booking.

Departures are guaranteed with a minimum of 2 persons on a tour. In the event only 1 person is confirmed for a tour they will be transferred to another tour or refunded in full. Tours operate in all weather. If it has been raining for 15 minutes consecutively at the time the tour was due to depart then clients can if they wish request to transfer to alternative tour or be refunded less a £5.00 admin fee. The only experience required is that all participants can ride a bicycle. If a participant is unable to ride a bicycle safely then they may be asked to stop riding and will not be refunded. Safety helmets are provided free of charge.

CHILD POLICY: Children under 10 years old are not permitted on these tours. Child rates apply for children 10-16 years old. Anyone under 18 years old must be accompanied by an adult.

CANCELLATION TERMS:
· Amendments can be accepted up to 24 hours prior to departure, subject to availability.
· Cancellations with less than 72 hours notice will be charged at full (100%) rate.
· Cancellation received more than 72 hours before the tour time will be refunded less a £5.00 admin fee.